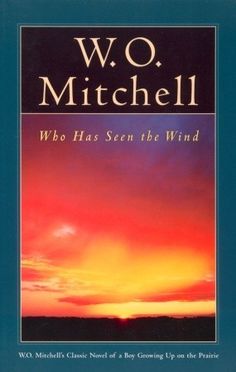 The Seniors Book Club will meet at 2:00 pm on Wednesday, October 11 in the Training Room to discuss Who Has Seen the Wind by W. O. Mitchell.

When W.O. Mitchell died in 1998 he was described as “Canada’s best-loved writer.” Every commentator agreed that his best – and his best-loved – book was Who Has Seen the Wind. Since it was first published in 1947, this book has sold almost a million copies in Canada.
As we enter the world of four-year-old Brian O’Connal, his father the druggist, his Uncle Sean, his mother, and his formidable Scotch grandmother (“she belshes…a lot”), it soon becomes clear that this is no ordinary book. As we watch Brian grow up, the prairie and its surprising inhabitants like the Ben and Saint Sammy – and the rich variety of small-town characters – become unforgettable. This book will be a delightful surprise for all those who are aware of it, but have never quite got around to reading it, till now. (Publisher)

W.O. Mitchell, the only Canadian author recognizable by initials alone, was born in Weyburn, Saskatchewan in 1914. Educated at the University of Manitoba, he lived most of his life in Saskatchewan, Ontario, and Alberta, where for many years he was the most renowned resident in High River.

During a very varied career Bill Mitchell travelled widely and was everything from a Depression hobo to the fiction editor of Maclean’s. A gifted teacher, he was visiting professor at the University of Windsor for several years, and a creative writing instructor at the Banff Centre for many summers.

His best-loved book was Who Has Seen the Wind. Since its publication in 1947 it has sold over half a million copies in Canada alone, and is hailed as the greatest Canadian book on boyhood. The classic edition, illustrated by William Kurelek, became a bestseller in 1991. Complementing that book is his 1981 best-seller How I Spent My Summer Holidays, hailed by some critics as his finest novel, although Since Daisy Creek (1984) and Ladybug, Ladybug…(1988), Roses Are Difficult Here (1990), For Art’s Sake (1992) and The Black Bonspiel of Willie MacCrimmon (1993), illustrated by Wesley W. Bates, were also well-received best-sellers. Besides The Kite (1962) and The Vanishing Point (1973), he was also noted for his two collections of short stories, Jake and the Kid (1962) and According to Jake and the Kid (1989). Based on the legendary CBC radio series, both classic story collections won the Stephen Leacock Medal for Humour. (Publisher)

W.O. Mitchell blows up an outhouse (an interview with Peter Gzowski)

An interview with W.O. Mitchell about his life and Who Has Seen the Wind